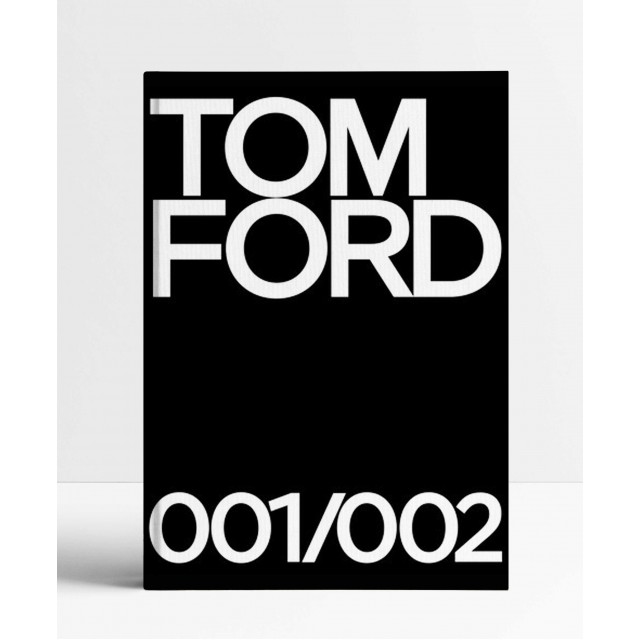 Tom Ford and Tom Ford 002 slipcased together as one deluxe package, with a unique printing of the slipcase which will be white type with black cloth.  This unique edition includes a Tom Ford signed bookplate. All materials used are FCS certified.

Description of Tom Ford 002: Synonymous with high-octane glamour, opulent sexuality, and fearless fashion, Tom Ford is an iconic designer whose namesake label has devout followers across the globe, from Milan and New Delhi to Shanghai and New York. Seventeen years after his best-selling debut book Tom Ford (2004), which detailed his time as creative director for the Italian label Gucci, this second volume is a visual ode to Ford’s eponymous brand created in 2005 and encompasses cosmetics, eyewear, menswear, and his critically acclaimed womenswear line.

This volume, printed with Forest Stewardship Council approved materials and edited by Ford personally, reflects his exceptional taste and unapologetic sensual aesthetic and is a true collector’s item for his devotees and connoisseurs of fashion, style, and design.

The revered designer not only catapulted his brand to the highest echelons of the fashion world—receiving accolades from the Council of Fashion Designers of America and Time magazine’s Best Designer of the Year—but also commanded the attention of Hollywood by featuring loyal A-list fans such as Julianne Moore, Lauren Hutton, Pat Cleveland, and Nicholas Hoult in his runway shows and advertising campaigns.

Description of Tom Ford (2004): Tom Ford has become one of fashion’s great icons. He transformed Gucci into one of the sexiest fashion brands in the world. His designs increased sales at Gucci tremendously and helped build the Gucci brand into the luxury goods conglomerate that it is today.

Ford brought a hard-edged style synonymous with 21st century glamour to his clothes, and Hollywood sat up and took note. This book is a complete catalogue of Ford’s design work for both Gucci and Yves Saint Laurent from 1994 to 2004.

It chronicles not only Ford’s clothing and accessories designs for both houses, but also explores Ford’s grand vision for the complete design of a brand, including architecture, store design, and advertising. Tom Ford features more than 200 photographs by Richard Avedon, Mario Testino, Steven Meisel, Helmut Newton, Herb Ritts, Terry Richardson, Craig McDean, Todd Eberle, and numerous other photographers including many previously unpublished images.

Published to coincide with his departure from Gucci, this book has been created with Ford’s full cooperation and every page reflects his exceptional taste. It is Ford’s testament to a career of singular moments reinventing the boundaries of style and sensuality in clothing.

Graydon Carter was Vanity Fair’s editor in chief from 1992 to 2017 and is now editor of Air Mail, the digital news platform.