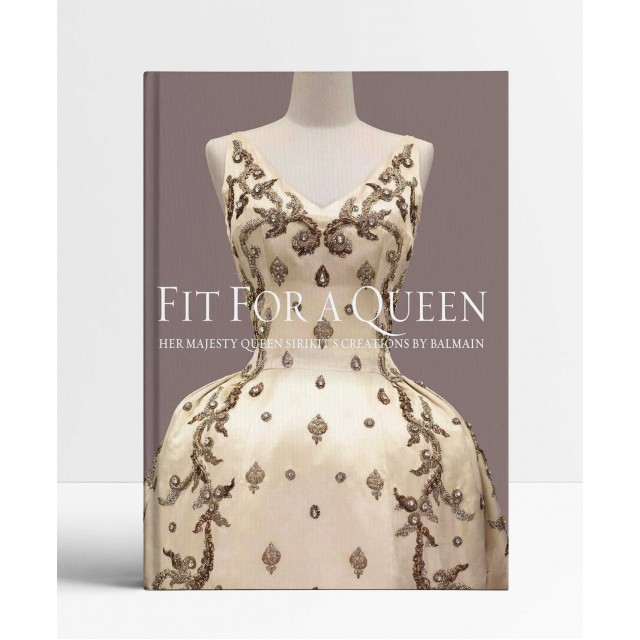 In 1960, Their Majesties King Bhumibol Adulyadej and Queen Sirikit of Thailand embarked on a historic, six-month-long state visit to 15 Western nations. Her Majesty, the first queen of Thailand to visit the West since the 1930s, anticipated that her wardrobe would receive close scrutiny from the Western press and public during the tour.

Wishing to ensure that she was always appropriately dressed, and that her appearance met European and Americans sartorial expectations for royalty, Her Majesty turned to Paris, specifically to top couturier Pierre Balmain, for a regal wardrobe of daywear, cocktail and evening dress, outerwear, and

accessories that would see her through every possible occasion in all seasons. Thus began a significant two-decade-long collaboration between Queen and couturier. Balmain’s designs for the Queen were simple yet sophisticated.

Many were made of Thai silk, which gave Her Majesty’s French clothes more than a hint of Siam. Thus clad, Her Majesty was widely acclaimed for her beauty and chic, becoming the era’s epitome of royal style and a tastemaker of truly international stature.

Now for the first time, photographs of many of the outfits Balmain designed for Her Majesty during their 22-year-long association, together with examples of some of the thousands of sketches made specially available from Balmain S.A. in Paris, are gathered together in this beautiful book by well-known dress historian and curator Melissa Leventon, with photographs by renowned Thai fashion photographer Nat Prakobsantisuk.

The book, published in conjunction with a major exhibition mounted by the Queen Sirikit Museum of Textiles in Bangkok, is a tribute to a unique collaboration which led to Her Majesty Queen Sirikit of Thailand being voted one of the world’s best dressed women.