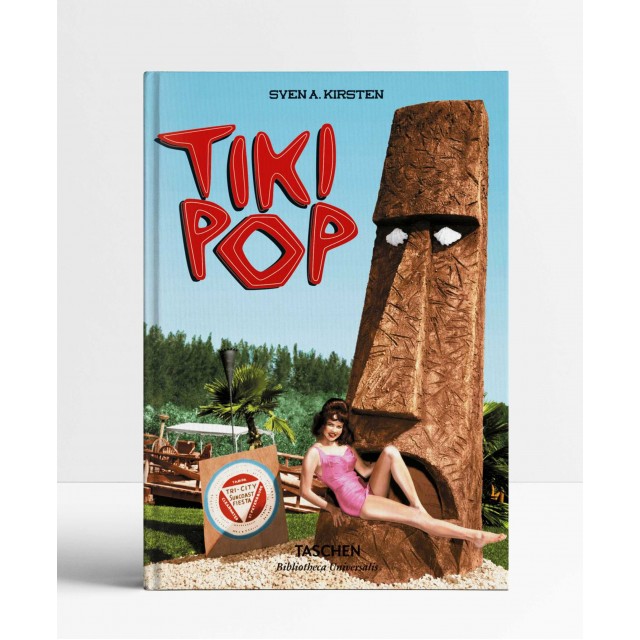 Urban islands and bamboo hideaways set the stage for a pop culture phenomenon like no other. In mid-century America, the imaginative appeal of Tiki penetrated fashion, music, eating, drinking, and architecture.

With hundreds of images, Tiki the pop icon unfolds from its earliest, enthusiastic beginnings to its spectacular downfall in the dawning awareness of the Western world’s colonial misdeeds.

This book is the culmination of the extensive research of Sven Kirsten, urban archaeologist, Tiki sage, and author of earlier TASCHEN investigations, The Book of Tiki and Tiki Modern, which first recovered the figure of Tiki from obscurity.

In his widely lauded graphic style, Kirsten places venerable ancient godheads next to their Polynesian pop counterparts, movie posters next to matchboxes, comic strips next to Robinson Crusoe illustrations. The result is at once a visual feast, a piece of cultural history, and a tribute to a very particular vision of paradise.

Sven Kirsten is a cinematographer and urban archaeologist. It was his love for visuals that inspired him to collect and photograph the remnants of the forgotten culture of Polynesian pop in America, leading him to identify the Tiki as its icon.

As a hunter and gatherer of lost artifacts and ephemera of this phenomenon, he began to see the pattern of a unique art form, and decided to publish his findings in the Book of Tiki in September 2000. Four books later, the cult of Tiki has made a spectacular comeback.