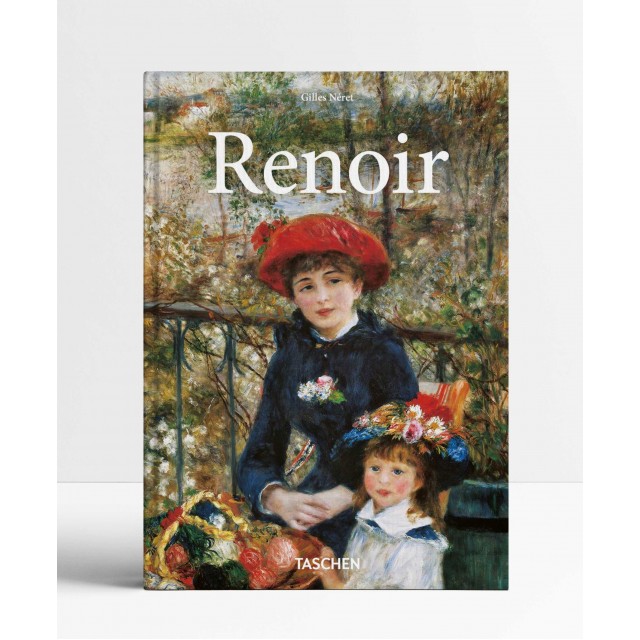 Pierre-Auguste Renoir’s (1841–1919) timelessly charming paintings still reflect our ideals of happiness, love, and beauty. Derived from our large-format volume, the most comprehensive retrospective of his work published to date, this compact edition examines the personal history and motivation behind the legend.

Though often misunderstood, Renoir remains one of history’s most well-loved painters—undoubtedly because his works exude such warmth, tenderness, and good spirit.

In an incisive text tracing the artist’s career and stylistic evolution, Gilles Néret shows how Renoir reinvented the painted female form, with his everyday goddesses and their plump contours, rounded hips and breasts.

Renoir’s later phase, marked by his return to the simple pleasure of the female nude in his Bathers series, was his most innovative and stylistically influential, and would inspire such masters as Matisse and Picasso.

With a complete chronology, bibliography, photos, sketches, and brilliant reproductions, this is the essential work of reference on this enduring master artist.

Gilles Néret (1933–2005) was an art historian, journalist, writer, and museum correspondent. He organized several art retrospectives in Japan and founded the SEIBU Museum and the Wildenstein Gallery in Tokyo.

He directed art reviews such as L’Œil and Connaissance des Arts and received the Élie Faure Prize in 1981 for his publications. His TASCHEN titles include Salvador Dalí: The Paintings, Matisse, and Erotica Universalis.